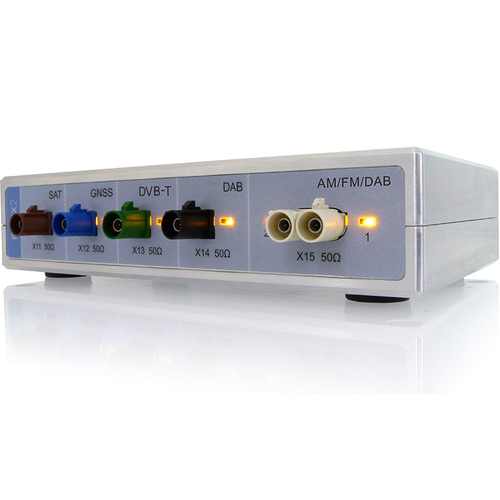 De-Multiplexer for Broadcast and Navigation Signals

FDMX2-PT is a compact table top unit for the selective splitting of a frequency multiplex signal into the different broadcast bands and to the L1 satellite navigation band. The device has programmable current sinks for the simulation of active antennas and for intensive tests of phantom supply sources and a voltmeter in each output. The presence of phantom voltages at the outputs are indicated by LEDs. The control of FDMX2-PT occurs via USB remote interface with ASCII strings.

Splitting in Broadcast and GNSS

FDMX2-PT has coded Fakra connectors for the direct connection to the antenna inputs of the devices under test (DUT). As output signals the broadcast bands AM/FM, DAB, DVB-T und SDARS and the GNSS L1 band for satellite navigation (GPS, Galileo, GLONASS, Beidou) are selective available. The broadcast bands AM, FM and DAB are dual available at a combined Fakra connector. Additional the DAB signal is let out at separate Fakra connector. A RF cable set for the connection of the FDMX2-PT to the antenna ports of the DUT is part of delivery.

FDMX2-PT has six programmable current sinks which are independent settable in the range 1 mA … 300 mA in 1 mA steps.  Each channel has a voltmeter for the test of phantom supply sources in the DUTs. The settings and the query of phantom voltages is done via USB remote interface at the device. The control occurs with ASCII strings which are orientated to SCPI99 standard. To enable an operation without computer, the set values are storable in FDMX2-PT.

FDMX2-PT has a rugged shielded metal housing and is suitable as table top unit. The internal voltmeters avoids cables to e.g. external multimeters. The external measuring cables act as antennas and can couple interfering radiations to the measuring signals and interfere with sensitive measurements.

FDMX2-PT is used in combination with the multicouplers of the WSDU series. It is used in signal distributions for the test of multimedia systems for automotive, in research and development( R&D) and in production.